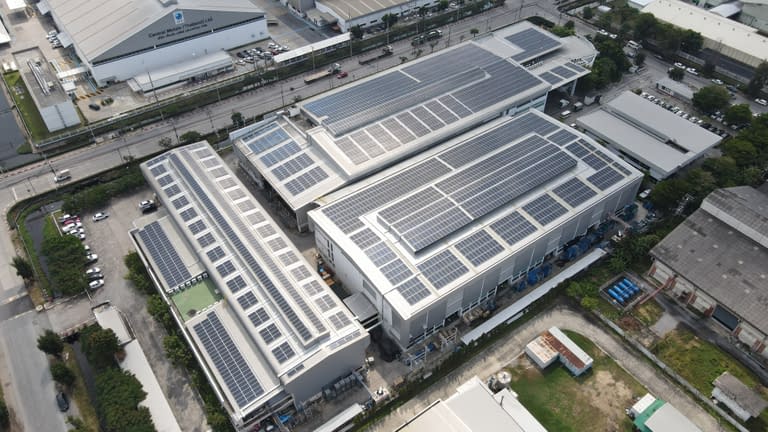 On February 11th, Constant Energy is pleased to announce it has executed five more long-term Corporate PPAs with Ampas Group’s factories located in Bangpoo Industrial Estate, Thailand with a total capacity of 2.8 MW. Following the installation in 2020 of the same projects of 5.1 MW, the second and third phase projects are expected to be completed and start operation in the third quarter of this year. Ampas is a leading automotive company from Thailand supplying global car manufacturers.

Due to the COVID-19 pandemic situation in Thailand and regulations to travel across provinces, a physical signing ceremony is not able to be held. Constant Energy instead has held the E-Signing Ceremony via Zoom meeting application to follow COVID-19 preventions. Mr. Viroj, President, Mr. Kanute, Vice President, Mr. Prapit, Senior Operating officer, and Mr. Nattaphong, General Manager of Ampas Group have joined the celebration to strengthen the partnership between Ampas and Constant Energy.

Franck Constant, Founder and CEO of Constant Energy, stated “This really shows how strong our partnership is in which we would like to have this ceremony to express our gratitude toward AMPAS. We expect to continue and grow our long-term business partnership even more in the future. Also, for this year particularly, we Constant Energy aiming to achieve ambitious growth we plan to have more than 100MW in operation by the end of 2021 which AMPAS will be one of the significant partners in our plan.”

Mr. Kanute, a representative and vice president of Ampas added “Based on the first successful projects, this is the reason why we would like to corporate with Constant Energy for the extension which is the phase two and three. We would like to thank Constant Energy team and everyone’s support to make the projects happen successfully. Hopefully, we’ll have some more new sites coming up online soon in the next few years which are now under the construction.”

Constant Energy is a renewable electricity generation and storage provider which invests in, and manages, high-quality power assets in selected countries. As a solar developer and Independent Power Producer (IPP), we develop, design, finance, build, own and operate utility-scale and large industrial rooftop-based solar PV power plants. Regionally headquartered in Bangkok, Constant Energy operates in Asia with a primary focus in Southeast Asia (Thailand, Vietnam and Malaysia). We produce clean and reliable electricity to our clients for the long term, enabling them to reduce their energy bill, increase profitability and enterprise value while focusing on their core business activities. In January 2020, Constant Energy raised growth capital from private investment firm Olympus Capital through its Asia Environmental Partners (“AEP”) vehicle.
More information at www.constantenergy.net

Originated in 1979 in Thailand, the Ampas Group of companies (Ampas Industries, Ampas Auto Mirror, Ampas Tools, Ampas R&D, Ampas MPM) is an Original Equipment Manufacturer (OEM) for mirrors, lamps and plastic parts for the automotive industry. Strongly quality and sustainability focused, the Ampas Group seized the opportunity of Thailand being the Asian industrial hub for car, pick-up and truck manufacturing and assembly, and has grown steadily in the past 4 decades. Ampas has also formed joint ventures with a handful of international companies , and its part are supplied all over the World to clients such as Toyota, Isuzu, Mitsubishi, Nissan, Honda, General Motors, and Ford.